Ups and Downs of the German Pirate Party

Imagine a parliamentary debate on private data protection, on net neutrality or on deep packet inspection. And then imagine this debate held by members of parliament who actually had a clue what they were talking about. What sounds quite implausible already became true in a number of regional parliaments in a few countries where members of the Pirate Party entered local and regional governments. One of these countries is Germany where the Pirates gained a lot of attention also on the national level since their breakthrough in 2009. 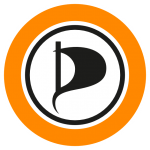 Germany has a quite stable party system which for decades was dominated by two big parties (Social Democrats and Christian Democrats) plus a small Liberal Party. In the 1980s the Green Party joined this group and since 2007 another party (The Left) did so, too. It is not uncommon that from time to time other very small parties get some attention but usually none of them is able to establish itself for a longer period of time. In 2009 political analysts started debating if another group would join this club of the established parties when the German Pirate Party became famous due to a debate on Internet filtering which was started by members of the Christian Democratic Party at that time. Then Family Minister Ursula von der Leyen came up with a new law which would force Internet Service Providers to filter certain content, at that time limited to child pornography online. However, Internet users and activists feared this could be the introduction of censorship on the net. An extensive debate started which mobilized a large quantity of Internet users and especially young people up to thirty years of age. The failure of the Christian Democrats to eventually establish the new law did not mark the end of the new user movement. Many of the newly mobilized people joined the German Pirate Party increasing their membership from a few hundred in 2009 to more than 30.000 in 2013.

The German Pirate Party was founded in September 2006 but had not gained a lot of attention until that moment. The Pirate Party originated from Sweden where the first of its kind was founded in January 2006 and became known in the context of the debate on the bit torrent site The Pirate Bay. In the following months and years Pirate Parties were founded in several countries mostly focusing on IT issues, intellectual property, copy right laws and transparency. Some of them got the attention of a considerable part of the population. One of these successful groups was the German Pirate Party which many saw as a phenomenon similar to the Green Party which started in the 1980s as a group of mainly environmentalists and during the years managed to establish itself as a successful political party covering a variety of issues. Also the lack of professional public appearance due to the inexperience of their members with daily political routines let analysts start comparing the early days of the two parties. And in deed the Pirate Party soon started to successfully participate in local and regional elections like in 2011 in Berlin (8,9%) followed by the 2012 elections in the states of Nordrhein-Westfalen (7,8%), Saarland (7,4%) Schleswig Holstein (8,2%). More and more harbors opened up for the Pirates and the established parties were realizing that for a long time they had ignored a professional approach of the information society for which they were now receiving the bill. Suddenly traditional members of parliament who were usually gaining their votes from the generation over 50 started using Twitter which was commented by the press with a certain humor as they were obviously not aware how to manage it. Meanwhile, the Pirate Party started aiming at what was supposed to be their biggest mission: a successful participation in the national parliamentary elections in the second half of 2013. And things looked good: in late 2011 official surveys showed that more than 8% of the German population was willing to vote for the Pirates which would be sufficient to enter the German parliament. However, things changed in the following months and in January 2013 during regional elections in the state of Niedersachsen the Pirates got only 2,1% of the votes. Also national surveys showed that their support among the voting population had decreased considerably bringing them down to 2% (in Germany 5% of the votes are necessary to enter parliament). The reasons for this change can be found in a number of internal problems and scandals the party went through in the past months. Read more in the follow-up article here: link.